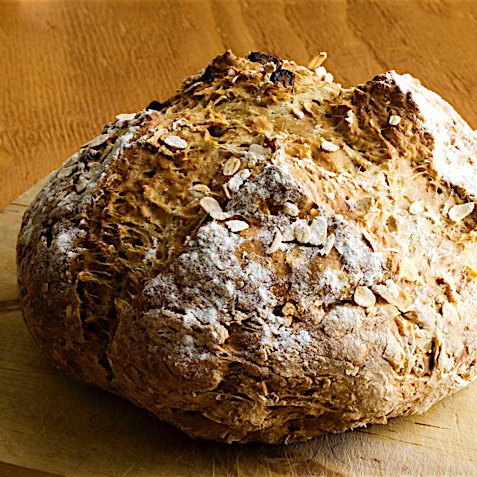 By Robin Asbell, welcome to the table.coop

It might be hard to believe that I remember a recipe from 40 years ago. My Mom’s battered copy of The Joy of Cooking had several bread recipes, including one for Cornell Formula White Bread. The recipe was for a loaf of white bread with added soy flour, dried milk powder, and a little wheat germ. The headnote at the beginning of the recipe stated that the bread had been developed at Cornell University as an easy way to boost protein in the diet. It was created to help feed people in the war rationing times of the 1940s.

While poring over the stained pages of the book, I became fascinated by the idea that some flours were healthier than others. I wondered, “Why wouldn’t you want to eat healthier bread all the time? In fact, why wouldn’t all bread be made with these magical ingredients?” My imagination was sparked by that simple idea, and I started experimenting with whole grain breads, adding soy flour, and milk powder and wheat germ.

My mom cautioned me about going too far, and in my youthful bravado, I ignored her one winter’s day and made a 100% soy flour loaf. The resulting brick of inedible, airless bean-flavored building material ended up tossed in the yard, in the hope that at least birds and squirrels would enjoy its protein-rich goodness. They did not, and when the snow melted that spring, the yellow loaf was still there.

In the many intervening years, I’ve played around with all sorts of bread baking, experimenting to find that balance between health, texture, and flavor. I’ve baked professionally, pitching yeast into industrial mixers that made 100 loaves’ worth of dough, and I’ve continued to bake at home on a regular basis. Like so many foods, homemade bread is so superior to mass produced bread that it is worth the extra effort. There is nothing quite like a freshly baked loaf or bun, still warm from the oven.

If you are just starting out with baking your own, there are a few things you should know. First, there are two kinds of breads. Yeasted breads use living single celled organisms to create the gases that make the bread rise. They also tend to rely on gluten, the stretchy protein in wheat flour that traps the gases in the bread, giving it a nice open texture. That’s why most breads are made with higher gluten flour, milled from hard red or white winter wheat. Quick breads are the second kind of bread, and they utilize chemical leaveners, like baking soda and baking powder, to cause gases to bubble up in the dough. Quick breads are usually meant to be more tender than yeasted breads, and often rely on softer flour, called pastry flour, which is lower in gluten. Quick breads are stirred together gently and quickly, to keep them low in chewy gluten, while yeasted breads are kneaded to get the gluten to develop.

Oh, and if you want to boost the protein in your bread? For every cup of flour, just substitute one tablespoon  non-fat dry milk powder or soy flour for the equivalent amount of flour. These recipes are already part whole wheat, and that has more protein than white flour, too.

Dive in and start baking, and you will be taking part in a timeless ritual, transforming simple ingredients into something magical. Your friends and family will thank you for it.

Here are some tasty recipes to get you started:

Feel like your immune system could use some suppor

🌮 It's Taco Tuesday at our Cascadilla Street st

Rosh Hashanah, the celebration of the Jewish New Y