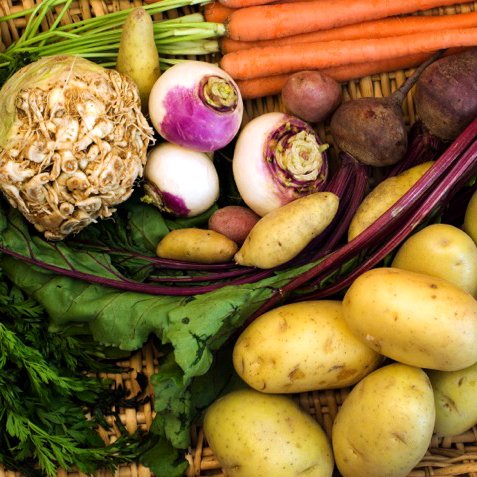 By Co+op, welcome to the table
Root vegetables can sometimes be a little intimidating, with their strange, tough appearance. But they’re a hardy bunch (they travel well, don’t bruise easily and are good keepers) and have much to offer cooks who get to know them — in flavor, color, texture, and nutrition.

What qualifies produce as a root vegetable? Simply put, it’s food that’s grown underground. Some root veggies are familiar — carrots, beets, potatoes, sweet potatoes, onions, garlic, and radishes, for example. (Technically, potatoes are tubers rather than roots, but for most cooks “root vegetable” works for all manner of tubers, rhizomes, bulbs, and corms.) Others are less common but equally deserving of a spot in the pantry — celeriac, jicama, kohlrabi, Jerusalem artichokes, rutabagas, burdock root, salsify, parsnips, turnips, and horseradish, for starters.

Root vegetables tend to be nutritional powerhouses, too, because they grow underground where they can absorb nutrients from the soil. The specifics vary with each veggie, but they’re generally high in antioxidants, potassium, and vitamin C. They’re low in calories and high in fiber to boot.

Raw or cooked, root vegetables are versatile in everything from salads to soups to side dishes and main entrées.

When it comes to salads, carrot salads are most familiar. These Indian Spiced Carrots and Moroccan Carrot Radish Salad recipes each feature raw carrots (spectacularly spiced), but other shredded root veggies — think beets or parsnips — would shine, too.

Use root vegetables to make chips, hash browns, or fries, and add them to stir fries. Or celebrate these workhorses by crafting a potpie or stew using an assortment of root veggies. Most root vegetables can also be pickled.

Substituting any root vegetable for potatoes is an easy way to mix up your recipe repertoire. Try mashed turnips and hash brown rutabagas, for example, or celeriac chips and parsnip fries! Serve these Sweet Potato and Parsnip Latkes for an unexpected breakfast, lunch or dinner.

Roasting root veggies enhances their natural sweetness. To roast, simply toss the cut up veggies with a little oil and place on a baking tray. Sprinkle with garlic, salt, pepper, and other seasonings as you like. Bake in preheated 400°F oven for about half an hour, stirring once halfway through. (Check the veggies as they cook; some will take longer, some less time. They should be nicely browned.) Give Mediterranean Roasted Vegetables a try, then use the veggies to top a salad or pizza, grains, or pasta. The recipe calls for sweet potato, but any selection of root veggies would work beautifully.

You can pick up root vegetables year round, though there are peak seasons, such as: summer through fall for beets; winter through early spring for celeriac; fall through spring for salsify and parsnips; fall and winter for turnips and rutabagas.

Look for root veggies that are bruise free, with no cuts. Keep in mind that when it comes to roots, the firmer the better! If the leafy greens are still attached, they should be bright and not limp. Choose specimens that are heavy for their size but not too large or they may be woody.

If you’re lucky enough to have a root cellar, you can store root vegetables for months on end. Otherwise, keep the unwashed veggies in a cool, dark place or tuck them in the crisper of the refrigerator in a paper, plastic, or vegetable storage bag. (There are exceptions: Don’t refrigerate onions, garlic, or potatoes until they’ve been cut or cooked.) Most will keep for two weeks or longer.